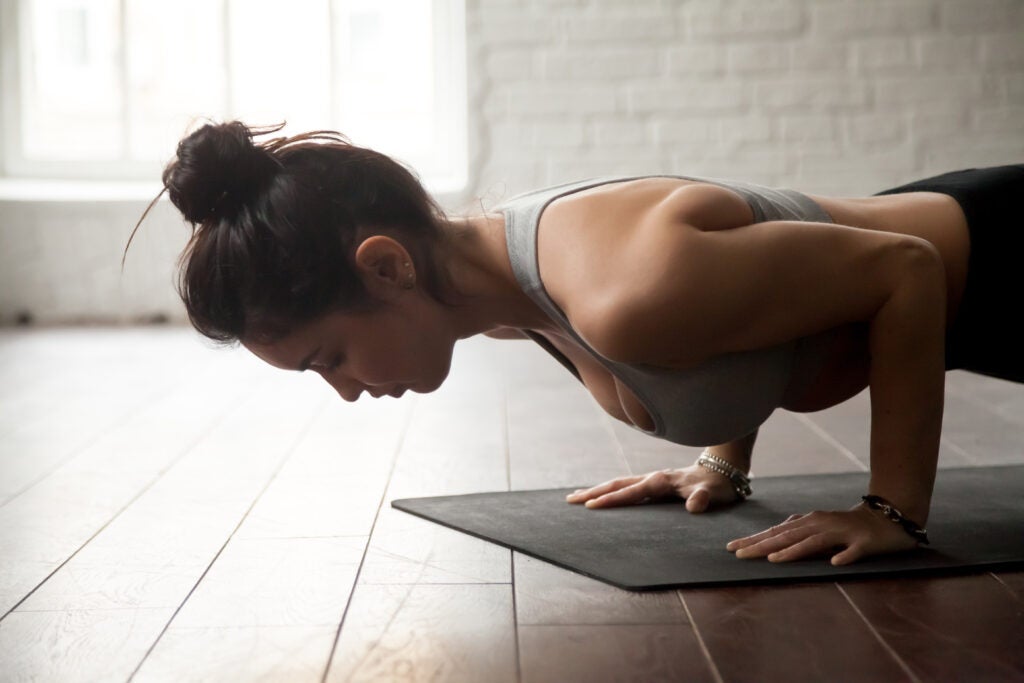 Chaturanga Dandasana (Four-Limbed Staff Pose) is a yoga staple–a posture that you often hold and move through as you transition from one pose to another. If we don’t practice it with care, however, it can cause or exacerbate shoulder or wrist injury.

A challenging pose, Chaturanga requires strength in your arms and upper body as well as in your core and even your feet. It’s also a pose that can build strength for other arm balances, says Bengaluru-based yoga teacher Preeti Kalia.

Here are seven tutorials for Chaturanga Dandasana that demonstrate helpful techniques for finding safe alignment, building strength, and approaching the pose in a way that allows you to continue practicing it for years to come.

1. Pay attention to anatomy in Chaturanga

If you are practicing vinyasa, Matt Giordano estimates you may be coming into the pose between 30 and 50 times a session. “It’s super beneficial that we understand what’s going on in our body when we’re doing this repetitively,” he says.

Giordano, known as The Yogi Matt, breaks down Chaturanga’s arm and shoulder actions in  detail. He explains the anatomy of the upper body and the “balancing action” that helps you engage the muscles involved in maintaining the alignment you need to hold the pose.

2. Spend time preparing for the pose

Adela Serrano offers a Chaturanga practice that incorporates a variety of props to help you prepare for the pose. While most videos begin with Plank Pose, she begins her tutorial by practicing Virasana (Hero Pose) while sitting on a block. A strap looped across her back and around her upper arms holds her shoulders in the position that your arms take in Chaturanga. It can be helpful to practice the shape of a pose and alignment of a pose before you actually get into the posture.

“It’s almost like you are setting the tone of the pose preparing certain parts of the body to do Chaturanga Dandasana,” she says.

Bengaluru-based Preeti Kalia begins her tutorial with preparatory poses. Circling the body in Tabletop helps you practice weight distribution on your hands and arms. She demonstrates protraction and retraction of the shoulders in Cat Pose to help establish the feeling of distance between your shoulder blades.

While you can expect to feel the effects of Chaturanga in your wrists and forearms after practicing the pose, she says, “If you are having a pinching pain on the outer side of your wrists that means you did not engage your inner knuckles properly. For that, make sure you are pressing your palms nicely into the mat and pushing yourself away, protracting your upper back.

Natalie Finnie, also known as Ashtanga Yoga Girl, based in the UK, offers two variations on the pose–one for beginners and one for people who have more strength. Her 10-minute video focuses on positioning the shoulders–the area of the body that is crucial for safe practice of the pose.

For example, when you set up the pose on hands and knees, “start to push the floor away,” she says. This movement, called protraction, keeps your upper body from sagging down between your shoulders. “And then, rather than have the shoulders hunch up toward the ears, you want to drop them away from the ears.”

She points out some of the “little mistakes” students commonly make in Chaturanga–dipping your shoulders toward the floor, dropping your head, or allowing the elbows to flair out to the side—and offers alternative positioning.

5. Hand position is key to an injury-free Chaturanga

Viru Badwal, based in Macau, offers a helpful instruction for hand and arm alignment in Chaturanga. To avoid turning your hands out too far, Badwal explains, spread your fingers and find the line between your index and middle finger and align it with the center of your wrist.

6. Build up to Chaturanga in four stages

“This is something that, before I met Sophie, I thought I was doing okay,” Smart says. “It’s those small little changes that you can make…that make all the difference.”

Dear’s four stages enable anyone to progressively build strength and alignment in Chaturanga. Her variations include knees-down versions, as well as ways to keep your elbows aligned over your wrists and tucked close to the body.

7. Chaturanga can be accessible for all types of bodies

Amber Karnes’ Chaturanga session is accessible for a variety of body types and experience levels. Her approach focuses on building strength using props and practicing wall exercises to increase awareness about form.

“What we want to do is learn how to do this pose with integrity and with support while we’re building strength,” she says. She shows how using a bolster can “catch the weight of your body” so you can focus on the alignment of your elbows, shoulders, and neck. Pushing up and lowering down slowly helps build the upper body strength you need.