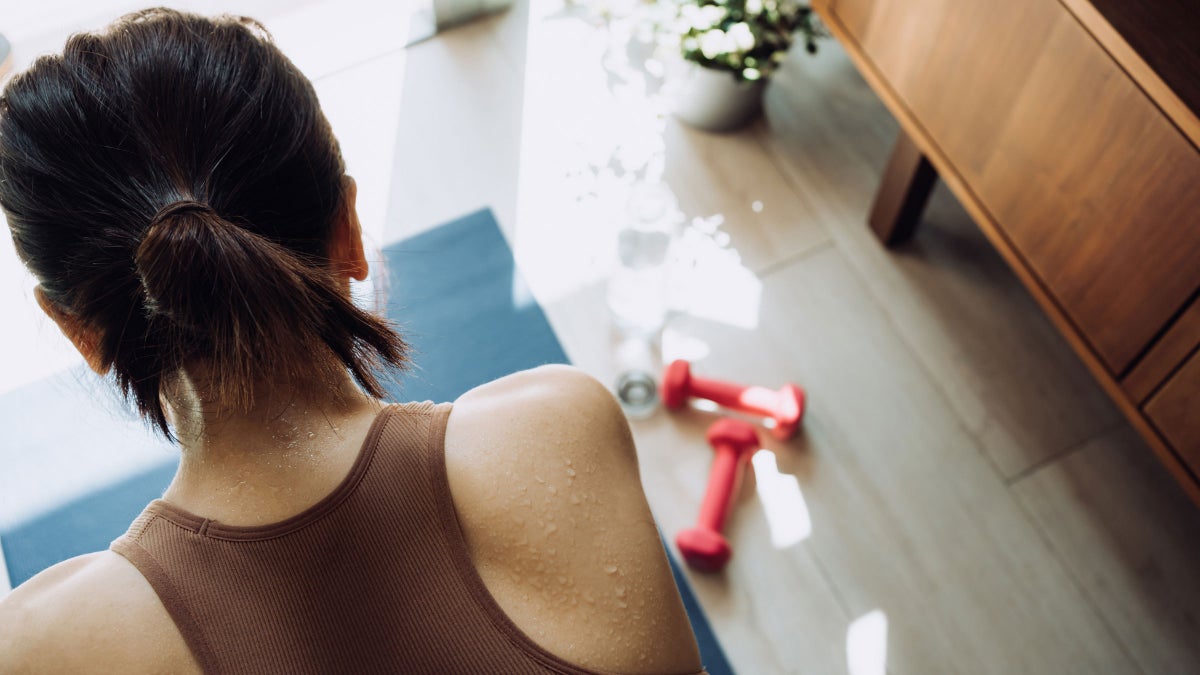 In college, I did a lot of running, spinning, and lifting. (The smell of that musty gym still lingers on some of my t-shirts.) I was doing everything—except yoga. It wasn’t for me. A sequence wasn’t a real workout, so what was the point?

Sure, I had done a few “recovery flows” as a high school athlete and had attended a handful of classes here and there. (I knew what a Downward-Facing Dog was, don’t worry.) But at that point in my life, I was preoccupied with pushing my body to the point of exhaustion. A workout wasn’t a workout if I wasn’t dripping in sweat by the end of it. So when a friend asked me to go to CorePower’s yoga sculpt class with her, I hesitated, but ultimately, I was game. My rationalization: The class had weights, therefore, it counted as a workout.

That first yoga sculpt class was brutal. My muscles shook in the poses, beads of sweat dripped down my face, and I’m pretty sure I was panting during the cardio section. But it was in the gentle moments—the long Balasana (Child’s Pose), the hold in Warrior III (Virabhadrasana III), and, of course, Savasana—that I discovered that yogic stillness. This was something I hadn’t known I needed. I went looking for a workout, and I came out with a new desire to seek out a larger sense of calm. In a lot of ways, that yoga sculpt class was the catalyst for my current practice.

The history of yoga sculpt

Yoga sculpt offers something different than many yoga classes. The classes I frequent often include weights, so I leave the room feeling like my muscles are truly on fire. (No, this is not an exaggeration.) It’s certainly a departure from the roots of the practice, moving into a yoga fusion territory that it is nothing if not complicated and controversial.

It’s difficult to trace the precise origins of yoga sculpt, but it can be tied to power yoga. Teacher Beryl Bender Birch is credited with beginning power yoga in 1995 with the publication of her book, Power Yoga. In an article for Yoga Journal, she said she sought to design a class that was derived from Ashtanga but more accessible to those unfamiliar with yoga.

“Most people wouldn’t take a class called Ashtanga Yoga, because they had no idea what it meant,” she said. “Power Yoga, on the other hand, was something Americans could relate to and know that they’d get a good workout.”

CorePower, which is the largest yoga chain in the country, launched its popular yoga sculpt class in 2004, according to Chief Executive Officer Niki Leondakis. “It was born from a request from our students to combine the mindfulness of a vinyasa-driven yoga practice with the strength-building and metabolism-boosting of weight-training and cardio,” Leondakis said in a statement.

As one of the most attended offerings, the yoga sculpt class can serve as a gateway to the studio’s more traditional yoga offerings, like their CorePower Yoga 1 or 2 class, Leondakis said. For students who proclaim “yoga isn’t for me,” it may be this class that changes their mind.

It wasn’t until I started writing this article that I realized I was one of those students. It took a single yoga sculpt class for me to open myself up to the practice of yoga. Nowadays, I turn to yoga sculpt class when I’m craving something that feels like a workout and a practice. I still go to CorePower’s class, but I’ve also had similar experiences at other studios. And whether it’s because of the complete exhaustion, the heated room, or the much-needed Savasana, it’s one of the only workouts where I find myself tuning out of my head and tapping into my body. Maybe that’s also “real” yoga.