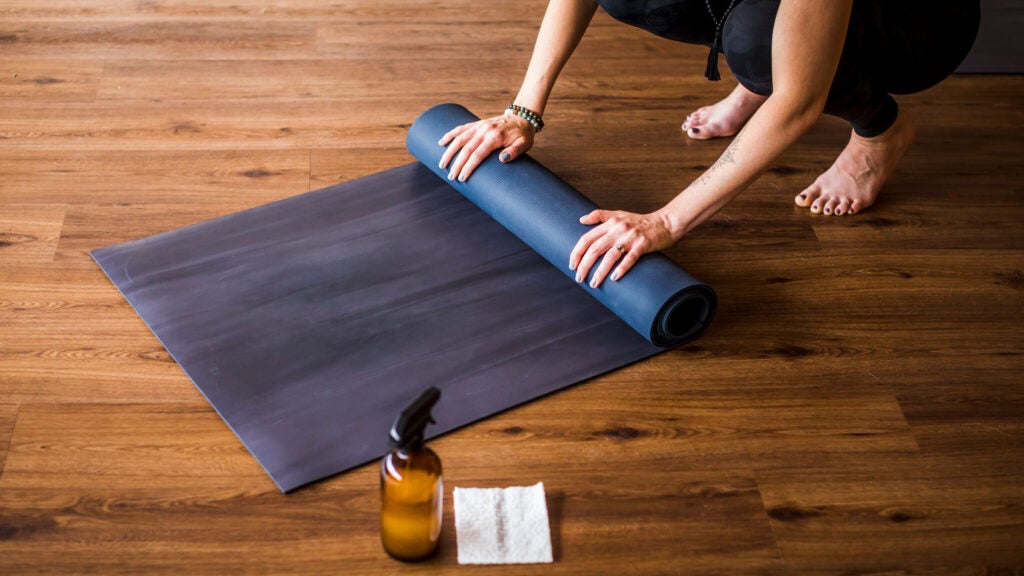 Are you guilty of a common yoga phenomenon? You rush out the door after yoga class for a much-needed coffee and—in the interest of time, of course—neglect to clean your mat. You’ll do it later, you think. And then days or even weeks go by.

You may figure it can skip a few washes, similar to how you throw on that old sweatshirt on chilly mornings and then toss it aside later. But how often do you really need to clean your yoga mat?

How frequently do you need to clean your mat?

If you’re practicing on your own yoga mat as opposed to a rental at your local studio, you’re likely only dealing with your own microbes, which are tiny organisms that can contain bacteria, as opposed to those of other students. (Whew.) In this scenario, you only need to clean it every two or three practices to keep it sweat-free, says Jason Tetro, a microbiologist and author of The Germ Files. So if you practice three times a week, you could designate one day to be your post-class disinfecting routine to ensure you don’t lose track of the last wipe down.

However, if you’re using a shared mat, consider a deeper cleaning process—including before you practice—since you’re encountering other students’ microbes. “That bacteria that you’re picking up on your yoga mat may end up actually getting onto you and that could cause problems,” Tetro says. You may already be familiar with some less-than-ideal instances where this type of bacteria transfer occurred, including in an NFL locker room.

As for those times when you’re coming into Salamba Bhujangasana (Sphinx Pose), your face inches away from your mat, and suddenly you catch a whiff of a not-so-soothing smell? That’s a sign your mat is past due for a cleanse. The stench, which stems from the bacteria’s waste products, is obviously a key indicator that your mat is in need of  disinfecting and not a quick wipe down, Tetro says.

How do I disinfect my yoga mat?

Freaking out and reaching for some disinfectant wipes? We don’t blame you. However, before you start spritzing your mat, consider the cleaner you’re using. As much as you may love DIY all-natural options, it’s best to stick to the tried-and-true products when it comes to cleaning your yoga mat.

A 2016 report conducted by researchers at Concordia University found three all-natural cleaning products—a made-at-home spray with willow bark extract and tea tree oil, Gaiam’s Super Yoga Mat Wash, and Grodi Yogi Yoga Mat Spray from an Etsy shop—to be ineffective in combatting the growth of Staphylococcus aureus (MRSA), a bacteria that can cause staph infections. (And yes, it has been found on yoga mats.) Unfortunately, that means your essential oil remedies aren’t going to cut it when it comes to sanitizing your mat.

Instead, Tetro recommends using hydrogen peroxide, which comes in bottled as well as wipe form. After hosing down your entire mat with this disinfectant, make sure the surface stays wet for between 30 and 60 seconds—the optimal time for reducing bacteria levels, he says.

What is the best way to clean my yoga mat after every few classes?

In between those occasional cleanings with disinfectant, stick to the basics. Soap and water, as well as laundry detergent, can help keep the bacteria at a low level, Tetro says. Without that fairly regular wipe-down, bacteria can proliferate and cause those unwanted infections and, er, aromas.

See also: The Ultimate Guide to Cleaning Your Yoga Mat