Many daily activities–steering a car,  typing on a keyboard, chopping vegetables for dinner, even hugging someone you love–are forward- reaching movements. Even in yoga practice, you’re often stretching our arms out in front of or reaching up overhead. That means you don’t get much of a triceps workout. But these muscles deserve your attention, says Richelle Ricard, author of The Yoga Engineer’s Manual: The Anatomy and Mechanics of a Sustainable Practice. They’re an important part of helping stabilize and strengthen your yoga poses—especially those that require weight bearing in your arms.

Anatomy of the triceps

Ricard, who has worked for 25 years in sports medicine, therapeutic and clinical massage, energetic bodywork, yoga, and meditation, explains the tricep as one muscle with three “heads” or “bellies.” This complex muscle main job is to help you move your elbow and shoulder. A single tendon attaches the muscle to the bony point of your elbow at the top of your ulna. The muscle extends up the arm in three parts: The lateral and medial head attach near the top of the humerus. The long head attaches at the base of the shoulder blade. All three parts contract to help you straighten your arm at the elbow, extend it behind you, or pull your arm in close to your side.

Your triceps are involved in any activity that requires you to reach back, pull something toward you, or reach up and pull down. But our modern lifestyle doesn’t call on these muscles very often. “We aren’t pulling nets out of the water. We’re not climbing trees and pulling ourselves up in space, so triceps aren’t getting exercised,” Ricard says.

There are yoga poses that engage and strengthen the these muscles and help stabilize your arm and elbow so that you can safely practice postures such as Forearm Stand.

Ricard offers some safety cues that you don’t hear often in yoga class. One is to avoid locking your elbows in any straight-armed, weight-bearing postures. (Think Downward-Facing Dog, Table or any pose where your hands are pressing into the ground.) Doing so puts the tendons of the elbow at risk over time, she says. A microbend in the arms activates muscle strength to keep you up, instead of relying solely on your bones and tendons to support your body.

She also advises students to be mindful of your hand and arm positioning in these poses. While we often hear the cue to stack wrists, elbows, and shoulders, Ricard says the exact positioning of your arms depends on your personal anatomy.

How can you determine your best hand position? Stand in Tadasana with your palms facing forward. Letting your arms hang in a natural position, notice how far your hands are away from your body. That’s approximately how far apart they should be in any weight-bearing position such as Upward-Facing Dog or Upward Plank Pose. This allows the triceps and other arm muscles work more efficiently to keep you in position.

Try the triceps-building poses below. The pairs or groups shown engage the muscles in similar ways. You can practice them together or use one as an alternate for another.

“Up Dog and Plank are virtually the same action at the shoulder and elbow,” Ricard says. Both are straight-arm, weight-bearing poses. If you are putting them in a sequence, you may decide to organize them so that you practice moving from Plank to Up Dog. Moving back and forth in this way activates the same muscles, Ricard says.

When holding these (and all straight-arm poses), she cues students to pull their elbows back toward their thighs while keeping their arms straight. “I’m kind of thinking about bending my elbow but not actually letting it bend,” she says. This keeps the elbow from locking and allows the tricep to strengthen and stretch at the same time.

Ricard suggests practicing Plank and Up Dog as preparation for the other postures below to get a sense of how this muscle group operates. Play with your hand placement and arm rotation to find the position that represents the best alignment for you. You can practice variations including One-Legged Plank and Three-Legged Dog, including knee-to-nose and knee-to-elbow versions.

Bridge Pose can be a triceps builder as well. It activates at the shoulder similarly to Bow Pose.  “When you practice bridge without a bind underneath you, its triceps all day,” says Ricard. Engaging the triceps also has benefits for the shoulders.

Instead of clasping your fingers underneath your body, bend your elbows 90 degrees and push them into the ground as you lift your hips.  Pushing your elbows down creates extension at the shoulder which engages the whole shoulder girdle. This practice helps students locate and activate the shoulder muscles. “When I teach this way, I can get people to feel their triceps in a real way at the shoulder. That actually trains them for poses like Locust and Bow where they have to lift the arm through space in extension,” she says.

Locust, Bow, and Camel are active extension postures in that they involve reaching back and pressing your arms away from your torso. Whether you grab your ankles in Bow or keep your hands free as in Locust, your actions are creating the same shape at the shoulder and elbow, according to Ricard.

If you hold your ankles in Bow, use your hands to actively pull your feet toward you as you press your feet away to create resistance and build strength. “If you only press away with your feet, you are relying on your spine to do all the work in the pose,” she says. “It will be more stretching than strengthening–and has the potential for injury.”

When reaching back into these poses, keep your arms close to the side of your body and try to maintain some softness in your elbows.

Ricard calls Chaturanga—a bent-arm, weight-bearing pose—the blueprint for all arm balances. Just as the triceps stabilize your elbow in Plank Pose, they also control the elbow bend in Chaturanga. Strong triceps are what allow you to lower yourself into the pose and hover there.

Crow relies on triceps in a similar way. “Here’s the arm in the same shape, but everything else has to work slightly differently to be supported in the pose,” she says. You engage the abs and the hip flexors to pull your body up into Crow, and work to find your balance in the pose. But because you are balancing the weight of your entire body on your arms, you will need strong triceps and biceps to hold yourself up.

Upward Plank and Reverse Table Top are similar poses. In both cases, your arms are in a strong backward extension, pressing into the ground, and bearing the weight of your body. Only your leg and core work are different depending on whether your legs are bent in Table or straight in Plank.

Though you are reaching back instead of forward in these poses, you will still want to keep a microbend in your elbow and be mindful of your hand position. You don’t need to place your hands directly under your shoulders.

“And instead of pulling the hands toward the feet as you would in Plank Pose, you’re pushing the hands away from the feet [in Reverse Plank], activating that extension of the tricep,” says Ricard.

“Gomukhasana is one of my favorite postures,” Ricard says. “Because of all the rotational aspects, there’s a lot happening here in the triceps.” It’s a complex pose that works each arm in a different way.

Being conscientious about these actions allow you to find integrity in the pose. Don’t just get in and out of this one. Spend some time in the pose, actively lifting your top elbow to the sky and drawing your bottom elbow closer to the spine, Ricard says.

If you want to practice a transition that targets your triceps, Ricard suggests practicing moving from Downward Facing Dog to Dolphin. “Triceps are controlling that descent into Dolphin and then working hard to get you back into Dog,” she says. Come into Down Dog (remembering to keep your hands placed a suitable distance apart and your elbows unlocked). Then bend your elbows to lower down into Dolphin. Stay in the pose and explore the feeling in your arms and shoulders, then press back up to Down Dog.

Once you feel strong and secure in the development of your triceps, you may feel ready for a full inversion that engages the the muscle group. Ricard recommends Forearm Balance. It involves the action of pressing the entire forearm down, from elbow to hands. “You’re using tricep to extend the elbow that has to stay bent to hold up the full body weight,” she says. 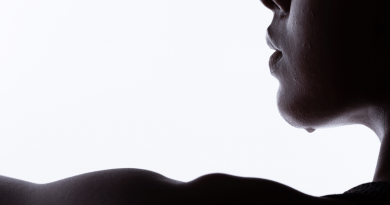 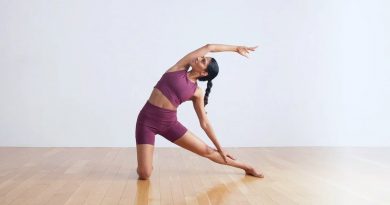 YOGA FOR MEN IN UNDERWEAR